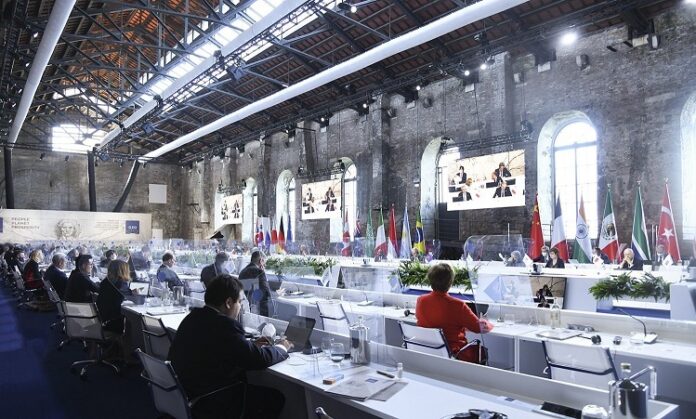 The global tax proposal that was made at the G7 summit earlier this year has been taken up by the G20 group of finance ministers at the recent summit in Venice, Italy. The global tax proposal aims to put an end to tax avoidance from multinational companies who are using various methods to avoid having to pay tax in countries with a higher tax rate. Once this landmark decision is approved by all the G20 nations, it will result in countries all over the world winning back hundreds of billions of dollars in tax revenue. However, many traders wonder how this could impact the online trading of high tech shares as CFDs in such companies as Google.

The Group of 20 (G20) is made up of 19 countries, along with the European Union, that work together on global economic issues. Founded in 1999 and made up of the largest economies across the globe, the G20’s aim is to find solutions for economic challenges around the world including climate change, financial stability and sustainable development. Members of the G20 include Argentina, Australia, Brazil, Canada, China, the European Union, France, Germany, India, Indonesia, Italy, Japan, Mexico, Russia, Saudi Arabia, South Africa, South Korea, Turkey, the United Kingdom, and the United States. These countries make up 90% of the gross world product (GWP), which means that their decisions influence the entire world. This year, the finance ministers and central bank governors from the G20 nations came together to discuss a few crucial matters, including tackling Covid-19, creating a plan to deal with future health-related problems, the path towards more sustainable economies, and global taxation issues.

In the most recent summit in Italy, the group has established that the global economic outlook is looking more positive now that there has been an extensive rollout of vaccines. However, global recovery remains staggered across different countries, so the G20 has created an action plan to continue pushing the global economy towards a more balanced and sustainable future. The G20 recognised that the World Bank, World Trade Organization and International Monetary Fund have formed a task force to help developing countries with Covid-19 vaccines and diagnostics.

Climate change remains a matter of priority for the group, who plans to integrate the identified climate risks into their global risk monitoring and preparedness strategies. Clean energy solutions will be a focus, for example carbon pricing, and helping developing countries achieve greener economies as well.

The global tax proposal that was discussed at the G7 summit was revisited at the G20 summit. The proposal concerns a 15% minimum corporate tax rate for multinational companies, and was backed by the G20 group as well, resulting in companies who have headquarters in other countries having to pay the new tax rate once it’s approved. This will curb tax avoidance from companies who shift their profits to other countries in order to pay less tax. Big tech companies like Google and Facebook are likely to be affected by the new tax rate, as it includes companies who have no physical presence but make significant amounts of money in a country through e-commerce or advertising. However, before the tax rate issue can be agreed upon, there are a few roadblocks to be ironed out, such as political issues in the US and Europe around the “digital levy.”  Also, President Biden aims to increase the tax on US companies who earn money from overseas to 21%, however opposition in congress is expected. A bid for final approval for the tax rate will be made at the G20 summit in October, after which we could see the impact on big companies playing out over the coming months and years.

Everything you need to know about poster printing

7 Things You Must Know Before Cancer Treatment

The Importance of Alkaline Foods for Your Immune System

Why You May Need A Dental Implant?

Muscular Pain: Advantages of Having the Treatment Done By Chiropractors

Types of cases that qualify for personal injury claims